Esme fits into this last category. She’s been riding for a couple of years but has never been able to find a frame small enough to accomodate her petite stature. Her most recent ride was an extra small Giant  and even this was awkward and far too big for her.

When I met Esme we discussed what she wanted out of a new mountain bike – the primary thing was to be comfortable and in control. I had a good look at her Giant and there were a number of issues I knew we could easily address – the rest of the frame design would need careful examination to ensure clearances on such a small model weren’t going to be problematic.

From the start there were no quibbles about wheel size – 26″ wheels were the only options that made sense – in truth 24″ wheels would have worked nicely but it is very hard to find quality parts in this category as it’s usually one aimed at kids bikes. Anything larger than 26″ would force the stand over height up – as it is Esme can’t comfortably stand over a 26″ wheel let alone 650B. 29er wheels never even entered consideration.

The suspension forks on her Giant were a coil sprung type with limited adjustability -they had approx 100mm travel but were nowhere near soft enough for Esme to use the travel effectively. They pushed the head tube needlessly high and made the front end heavy and unwieldy. The head tube itself was one of the shortest standard offerings at 110mm – going custom meant that I could create a headtube of any length. We decided at the outset that a light and supple short travel air sprung fork would be necessary as this would be the only feasible way to make the suspension soft enough for Esme’s light stature. I managed to source a new, old stock, RockShox SID World Cup fork with an ultralight carbon crown and steerer. I had the travel reduced to 80mm and with some subsequent fettling was able to allow for 25% sag for Esme’s weight. Using very low pressures ensured that the fork was super supple and that Esme would get the full benefit of her suspension.

Just specifying these changes in fork travel and the ability to set sag as well as run a shorter, custom head tube had already brought the front end down by 75mm. We were off to a great start!

I had some ideas on how to proceed with the rest of the frame design- this is what I came up with: 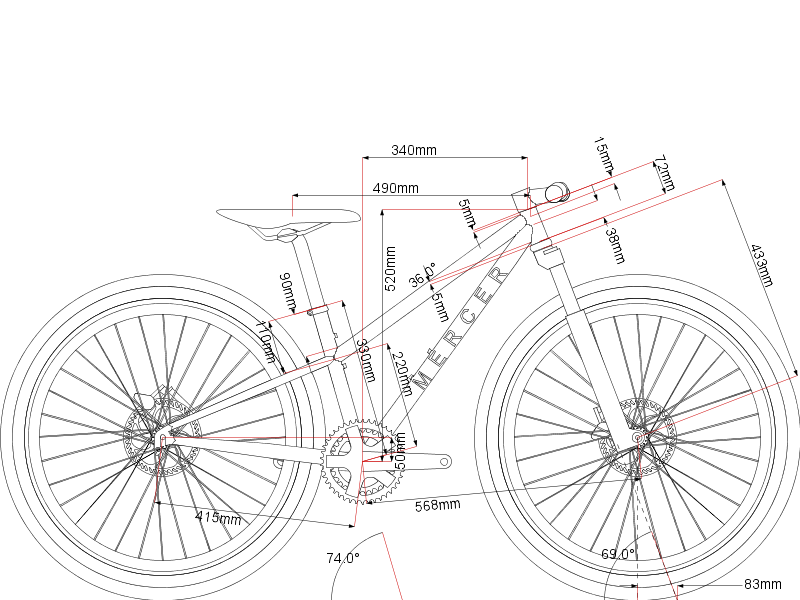 At first glance it looks like a teeny 29er. Delving deeper into the frame measurements reveals an extremely short virtual top tube length to shorten the reach. The head tube angle of 69 degrees is on the slack side to encourage a stable ride and predictable handling without being too twitchy – it also ensures that there isn’t any major pedal overlap with the front wheel. The BB is some 25mm lower than standard. This’ll make it easier to reach the ground with her feet and will also be more suitable for short cranks in the future.

The rear triangle is very compact and short to  help position Esme’s weight correctly over the bike. Longer chainstays would only serve to make the front end harder to loft.

The seat angle is a fairly steep 74 degrees but this helps to tuck the rear wheel in that much closer to the seat tube. It’ll also position Esme more directly over the pedals for a more powerful pedal stroke. An added advantage is that the steeper seat tube further reduces pedal overlap with the front wheel.

Or at least, these were the thoughts I had when I penned the design – the only way to know for certain would be to build it and to hear from Esme herself. 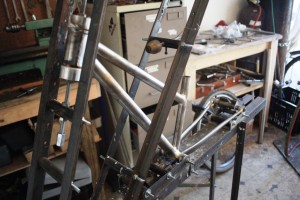 I started with a standard Columbus Zona tube-set albeit it with a skinny 28.6mm top tube and the thinner of the wall thickness options available. The Down Tube is 35mm as on most standard steel mountain bikes while the seat tube is in a 31.7mm offering that uses a shim to accept a 27.2mm seat post. I chose the oversized seat diameter as I was aware that I’d be removing the lower butted section of the seat tube and thus weakening the tube. This over-sized tube had the same wall thickness as a 28.6mm one and so should be strong enough for Esme. The head tube was shortened on the lathe – this removed the small external butt at one end of the tube that is designed to prevent flaring and so I machined a new reinforcement ring from mild steel stock tube and brazed it in place on the shortened end. The new, custom head tube now measured 72mm – the shortest possible length that would still accomodate a tapered steerer tube and standard headset. The front end came together quickly and soon I was adding the rear end.

I decided not to add a seatstay

brace in order to engineer just a little extra flex in the rear end for comfort – also to this end I had opted for skinny 14mm seat stays with an S-Bend profile. I joined the seat stays along the side of the seat tube so that they blended into the end of the top tube. This was getting very exciting!

The hallmark BB plaque and head tube badges were added. Braze-ons finished off the frame. It was time for a visit to Jared’s paint booth!

Esme had decided on a pale peach hue for the frame with a slightly darker, subtle text and when it returned from BMC I realised that Esme really had been spot on! It looked amazing! 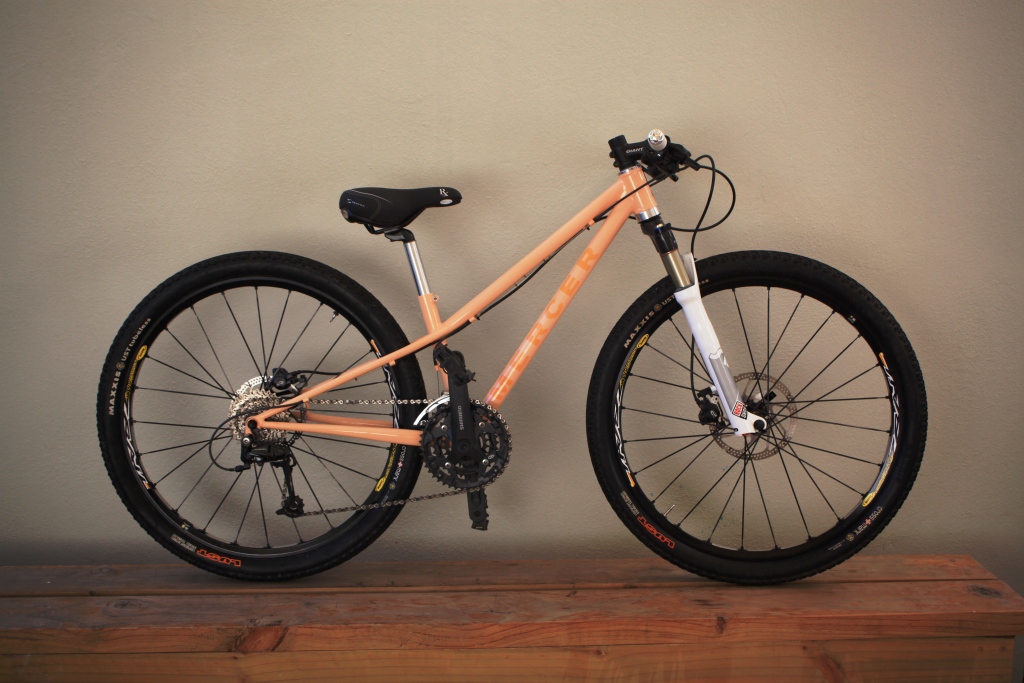 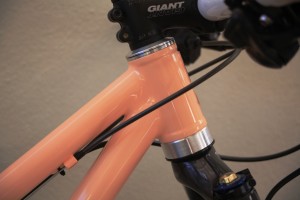 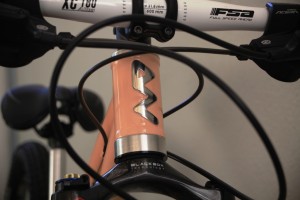 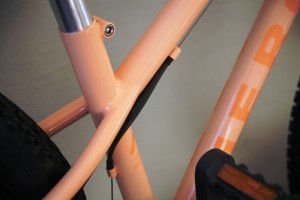 Built up,  the little bike looked destined to be a shredder. I tried my best to test it out meaningfully in the neighbourhood but found it impossible to fit my lanky frame into the bike’s confined proportions – it was time to introduce Petal to Esme herself. Only once Esme had ridden the new bike would I know whether I had been successful. It was a nervous wait until the morning Esme and her husband Dawie arrived.

I wheeled Petal out to Esme and Dawie waiting outside my house and as soon as they saw the little bike they both cracked huge smiles. Esme climbed aboard and I made a few minor adjustments to the control surfaces and saddle height. She set off down the road. They made a great pair – perfect for each other! 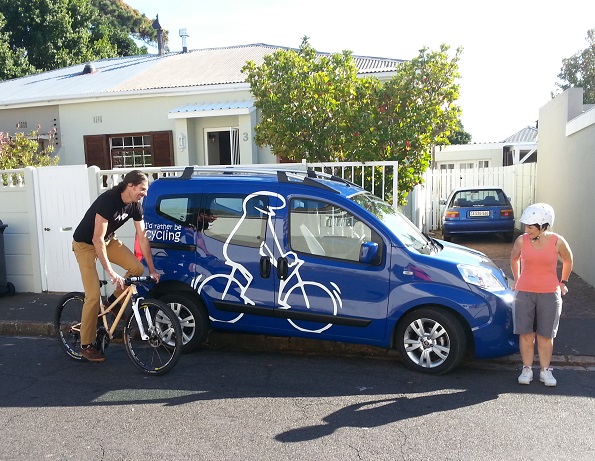 Just one surprise remained: a few days later Esme emailed some pictures to me. Esme had had a variety of polka dots in pastel colours made up on vinyl and these had been applied randomly all over the new frame.

After a few rides Esme sent me an email:

We went out for another ride this afternoon.  What a superb pleasure.  It is truly amazing what difference the right frame can make.  Never realised that riding can be so marvellous.

Petal is much livelier than my previous bikes. She turns easily and I can steer her much better.  Budgeting for her was definitely one of the best things that I did.

Thanks once again for your help.  You have made my life much easier.”

Esme, I’m only glad I could help you! Designing and building your bike was a fantastic and stimulating experience for me. I hope you and Petal have a wonderful life together!