As a South African who hasn’t spent much time in the UK I thought I had a good idea of what to expect – after all, I’d been raised on a diet of Beano and Dandy comics, as a child I’d followed the adventures of the Famous Five and The Secret Seven and as a bike obsessed teen I’d digested every available copy of Mountain Biking UK.  Although the main purpose of my visit to the UK was to attend the Handmade Bicycle Show, I also wanted to do some travelling. I had a week either side of the show in which to explore. I’d decided before my trip that two areas I’d like to see were Snowdonia in Wales and the Great Glen in Scotland. I had my (hopefully) trusty Monkey King and Guy’s custom made and equally (hopefully) trusty pannier bags and I planned on giving them all a good workout in the wilds of the British Isles.

I landed on a grey but warm morning in London. I was surprised it wasn’t raining but this was the first of many surprises in store (apparently it doesn’t ALWAYS rain in the UK). In fact, the sky was supposed to be blue, but, thanks to high altitude dust and sand blown north from the Sahara, Europe’s considerable air pollution had been directed over the UK and was now blocking out the sun. As a city with an already very poor air pollution record, London could have done without this, but she was taking it in her stride. Spring was blossoming, new leaves were unfurling in the parks and hemlines at schools around the country were on the rise.

‘Lovely day, innit?’ the shopkeeper asked as I gagged on the price of some bananas and a cooldrink. I was just around the corner from Matthew Sowter’s Saffron Frameworks in Southwark, London. I glanced outside at the grey sky and replied ‘yep’ uncertainly as I fumbled with the foreign currency. At the workshop Matthew seemed pleased to have an extra hand. He let me stay at his house and he lent me his bike so that I wouldn’t have to risk my Monkey King before I’d shown it off to the world.

I’d packed essential kit and spare clothes, a tent, a sleeping bag, a cooker and a pot into my backpack. I’d replaced all the cables on Matthew’s bike (winter hadn’t been kind) and the seat post was at maximum extension. I’d plotted my route south on Google maps on my new fangled phone and later that afternoon I hoped to be in Brighton. Now Brighton’s actually further from Snowdonia than London, but with a friend there, the offer of food and a bed, it seemed like a good starting point. The first couple of hours of riding from London had taken me through endless suburbs. These yielded to villages but the rolling green hills and verdant farmlands I’d read about were eluding me. The south of England is the most densely populated part of the UK and it wasn’t until the South Downs hove into view that I really started seeing pukka open countryside. Google maps had a little surprise waiting for me and at the foot of the downs instead of directing me along the side it pointed the way forward, straight up and over following a muddy footpath.

From the top of the Downs I had magnificent views in all directions and far in the distance I could see tall Brighton buildings hunkered by the sea. I followed the South Downs Way, a narrow singletrack in places and after a few miles was descending towards the sea, vigilantly looking out for shards of flint that could puncture my narrow road tires.

I stayed in Brighton for a couple of nights and saw the sights. ‘Brighton by the Sea’ is a mecca for holiday makers and Brighton Pier is the single most-visited place in the whole of the UK. Brighton has a seedy reputation and the gaudy carnival atmosphere and tacky merry-go-rounds at the beachfront do little to change this perception. 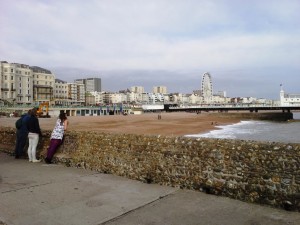 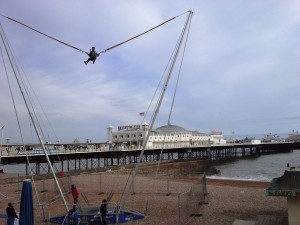 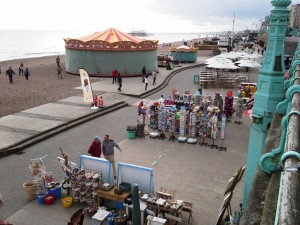 Soon I was off again. I boarded a train to Cardiff where I was staying with a friend’s brother, Tristan. In retrospect, Cardiff isn’t a very sensible way to get to Snowdonia either, but Tristan is a keen climber and I hoped to pick his brains about some easy climbs and classic scrambles to do once I’d arrived in Snowdonia. Armed with an itinerary I left Cardiff early the following morning on a train bound for Bangor, Wales.

The overheated, claustrophobic train pulled into Bangor station early in the afternoon. I was relieved to get out, even though the weather was supposed to be drab and damp. In a surprising about turn, the clouds had pushed off and Bangor reveled in afternoon sun, the Welsh mountains visible from the town limits. I wasted no time collecting a few supplies and then headed off, into the hills. I followed quiet B lanes and a cycle path up the Ogwen valley. The scenery unfolded before me. Space and mountains jostled blue sky. This was the countryside I’d been dreaming of. Although not far from town I was starting to feel the extra weight of a couple days supplies in my already over-loaded backpack and I was relieved when I rolled into camp below Tryffan’s North Ridge. And not a moment too soon either. As I was pitching my tent the wind picked up blowing icy blasts from the snowy summits around me. A little later, the rain was back. 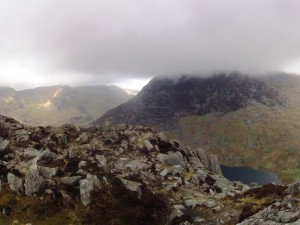 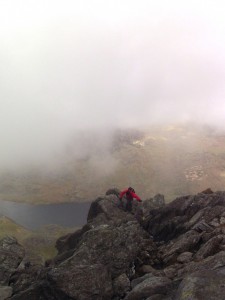 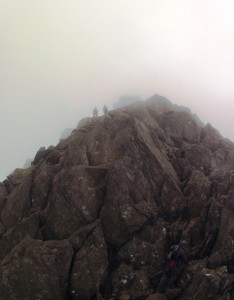 The following day dawned grey and cold, but at least the rain had stopped. I’d spent a comfortable night lulled by the sound of rain drops on the flysheet but I was eager to stretch my legs. I’d heard a lot about Tryffan’s North Ridge – it’s regarded as one of the classic mountain scrambles in Snowdonia and I hoped the weather would hold for long enough to have a good crack at it. Evidently a lot of other climbers thought the same thing – I joined a queue at the first rocky obstacle. The summit was shrouded in low cloud and the higher I climbed the colder it got. Many of the cracks in the rocks were filled with ice and I started worrying that I may not be adequately prepared. Every few minutes I’d shove my freezing hands into my armpits to thaw them out. Before long, the summit materialised out of the gloom – at least there was no where higher to go: I must have made it to the top. I ignored some sandwich eating climbers clustered around a drippy beacon and I continued down the crest on the other side to wander around on the hilltop moor opposite. It was here I learnt another thing about the UK – they have unusual bogs, and I don’t mean the sit-down kind. In South Africa, boggy ground usually lies low. Boggy ground obeys different rules in the UK. The savannah-like plain that spread out on the hilltop looked inviting and dry, the grass looked crunchy and in SA would have carried a red fire warning from Cape Nature. Within metres I realised I’d been conned. The grass-like stuff on top merely floats upon a ground that is more or less liquid. It was pretty cold and slippery too and so I slunk back to camp chastened and with a very wet bum and feet.

The next day dawned sunny and clear. There was a gentle wind blowing up the Ogwen Valley – it would be at my back while I continued my circuit and, I hoped, would not hamper my descent of Llanberis pass which I’d heard so much of. I shouldered my pack and set off once again on Matthew’s bike. The road was smooth and flat and the freedom of space and mountain side was glorious. I passed boggy moors and shaggy sheep and place names with missing vowels.By late morning I could see Mount Snowdon a short way ahead. To the right of Mount Snowdon was a low neck – the top of the fabled Llanberis Pass that features so prominently in praise from mountaineer and cyclist alike. I was in for a little surprise.

Mount Snowdon is not only Wales highest mountain but it’s also, famously, the area where George Mallory spent much of his time climbing and training before dying on Everest. The Llanberis pass is home to Cloggy – one of the UK’s most famous climbing areas and it’s on many cyclists’ lists as a pass to ride before you die. I was understandably excited as I climbed up to the neck at the top of the pass. Throngs of tourists were already queueing on the concreted path up Snowdon and the top of the neck was cluttered with tour buses. I imagined looking down from the neck and seeing endless switchbacks clinging precariously to the valley’s steep sides in an Anglicised version of Sani pass. Nothing could have prepared me for it’s diminutive stature. It was undeniably beautiful but I felt slightly sheepish, realising that the short pull up to the neck was probably steeper than the pass itself. As it turned out, the length of the pass and the beautiful mountain scenery more than made up for any lack of gross altitude change. Mile after effortless mile cruised beneath my tires as I settled in for the long freewheel.

It was a gentle descent and I was happy to be able to relax. My back was beginning to hurt badly from the heavy pack. I took my time savoring the views. Somewhere in the rocks on the right was Britain’s famous Cloggy. After some searching I finally saw it, Joe Brown’s seminal rock route ‘Cenotaph Corner’ standing out like a beacon.

From Llanberis the riding was flat as I headed back toward the coast and Bangor. I arrived back at Bangor station with a couple of hours to spare before my train to London – the temperature had dropped again and I couldn’t wait to get warm in the station’s cafe. And then I remembered the overheated train I’d arrived on a few days prior. I changed my mind and went and sat in the cold on the platform.

This air and space was something to savour.

Thanks for reading – join me soon for Part 2 – the Monkey King in Scotland.

Time to soak the flux off these fillets. They'll g

The Gibbon Handler : Dan showing me how it's done

Internal hose routing: more than just a couple of

Workshop tees are back in stock! Screen printed by

Thanks for the great ride this morning @irideafric

A little while ago Scott damaged his beloved @stin